A Broken Sun by Aditya Iyengar is the second book of a trilogy based on Mahabharata war. In the first book (The Thirteenth Day) of the series, the author presented a retelling of the events that took place between the tenth night to the thirteenth day during the war between Pandavas and Kauravas in the field of Kurukshetra. The book under review starts from where the first book ended. The book deals with the events that took place between the thirteenth night to the fifteenth night of the total of eighteen days of Mahabharata war. The story in this book has been narrated from the perspective of five different characters. These characters are Yudhishthira, Arjuna, Karna, Ghatotkacha, and Dushasana. 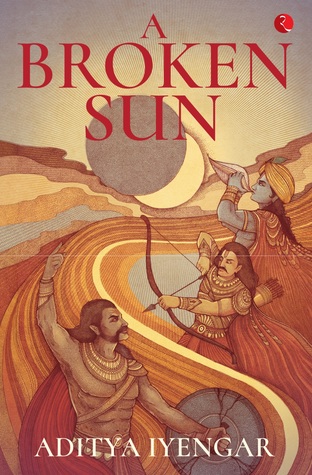 Writing battle scenes involving two large armies is not an easy task. The task becomes more difficult as the author has to define different characters’ motivation for fighting that war.  Writing about large armies is definitely exciting, but the presence of huge armies is not enough to fully engage the readers. Readers will love battle scenes if they care about the individuals involved in it. Why are these individuals fighting the war? What does the outcome of the war mean to them? There should be some sort of emotional binding for the readers. This is specifically true when the author is venturing into writing about the great war of Mahabharata and, on top of that, taking the readers right into the middle of the battle without giving any proper background. There is no doubt that the war of Mahabharata is well-known but you cannot take readers for granted. Therefore, writing a book based on a well-known battle like that of Mahabharata could be tricky. I am happy to say that Aditya Iyengar has accomplished this challenging task brilliantly.

While the book is based on the battle of Mahabharata, the author has made an earnest attempt to focus on characters too. He communicates with the readers through the voices of five different characters. By giving voices to characters from both the sides (Pandavas and Kauravas), the author has tried to show war-related strategies of both the camps. He continuously shifts perspectives to tell the happenings of battle. Of course, there are sights of blood splattering and clashing sounds of swords, points of view of five different characters have been used as a key tool in this book. Both external and internal conflicts of the major characters have been presented well. This has helped him in creating an immersive narrative.

Battle scenes have been crafted expertly. Action sequences are realistic. At the same time, the author presents a blow-by-blow description of a number of action sequences, and that makes the narrative boring in those scenes. I also found that there was not even a single ‘on the edge of your seat’ type of action sequence. The inclusion of some of these types of sequences could have turned the book more gripping. However, despite these weaknesses, the book is captivating enough to hold the attention of the readers.

Read the book if you love reading books based on Indian epics.

Note: I received a free copy of this book from Rupa Publications in exchange of an honest review