Historical fiction is one of my favourite genres as I am a student of history and archaeology myself. While the subject of history may appear mind-numbing and uninteresting to some readers, fiction based on history gives you a chance to envision the story behind the facts. If written cleverly and in an appealing manner, these books inspire the readers to read the non-fiction history books, too. Though there are a lot of problems associated with historical fiction such as the accuracy of the actual historical events described in such books, there should be no doubt that historical fiction provides an opportunity to make connections with the past. And, this is what The Counterstroke by Medha Deshmukh Bhaskaran offers you. It presents a story that took place during a notable period in Indian history. The book takes us to seventeenth century India when Aurangzeb (the Mughal prince) was planning to forge a bloody path to the Mughal throne and Shivaji (a Maratha landholder) had started creating trouble for the Mughal Empire. This book is the first in a series of three books. The series has been titled as Frontiers of Karma. This series is an attempt to tell, in English, Shivaji’s famous battle fought with Aurangzeb for the first time. There are a number of books dealing with the same in Marathi but nobody had attempted to do the same in English so far. So, in a way, this is a welcome publication. 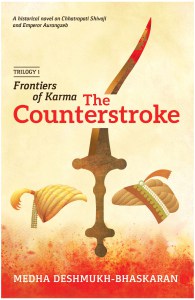 By thorough research, Medha Deshmukh Bhaskaran has woven an exciting tale of power, greed and betrayal set against the backdrop of the Late Medieval Period in India. The most important aspect of this novel is that it gives the readers a vibrant sense of the events through its pages. The readers not only can relate with these events but also can feel these. The writing has a visual quality. We find brilliant descriptions of a number of forts in the book. I have myself been to a number of these forts and, from my experience, can conform to the views of the author of this novel. Built to protect and serve the royalty, these forts naturally possess a long-lasting beauty.

The story has been narrated from the point of view of the two main characters: Shivaji and Aurangzeb. The stories of both these characters run parallel to each other and sometimes also criss-cross with each other. The author has paid careful attention in depicting the characters of these. The personality of an aspiring Mughal prince brilliantly comes out in the character of Aurangzeb. Likewise, the character of Shivaji skillfully brings out the persona of a celebrated rebel. The readers can easily relate to the motivations, worries, and lives of these characters with ease. The writers involved in writing historical fiction generally don’t pay enough attention to historical details. However, this is not the case with the book under review. Historical events depicted in this novel are accurate and have been described vividly. The author has also listed a number of valuable references in the form of a selected bibliography at the end of the book.

Being a historical fiction, the book mentions about a large number of geographical places of ancient India. And, every now and then, it becomes difficult to position these places accurately in our mind. Therefore, inclusion of some maps or some other illustration depicting these places could have enhanced the reading experience further. The author has also used a number of local terms within the text. There is no doubt that these terms add a certain charm to the writing. However, it also becomes difficult to comprehend the meaning of a number of these terms. While there is a glossary at the end of the book, this glossary deals with some selected terms only. It would have been better if the author could either have avoided the use of these terms or have explained all of them in the glossary. The book is also replete with typos. These typos not only break the flow of the story-line but also distracts the attention of the readers.

Overall, the book is a nice read and I will be eagerly looking forward to the next installment of this series.

Buy this book on Amazon

Note: This review was originally posted on thetalespensieve.com