The Seven Dials Mystery by Agatha Christie is a complex but enjoyable read. The story starts off at an English estate where a group of young people is having a splendid time. One among these youngsters has a tendency for coming late to breakfast as he is a late riser. Other members of the group plan to play a joke on him by placing eight alarm clocks in his room. Their plan is to wake him up early next morning with the violent sound of not one but eight alarm clocks. However, even the noises of eight alarm clocks do not wake him up. In fact, he never wakes up. On the other hand, he is found mysteriously dead due to an overdose of a sleeping drug next morning. Surprisingly one of the clocks is also missing as only seven alarm clocks are found in the room of the victim. In the beginning, it simply appears to be a case of suicide. But, what happened to one of the clocks? Sometime later, another member of this group of youngsters gets shot. The last words of this youngster were ‘Seven Dials’. What do these words mean? Do these words relate to the remaining seven alarm clocks found next to the first victim? Or, these words represent something more sinister? Is the murder of second victim connected to the death of the first one? Well! You will have to read the book to know the answers of these questions because I do not want to spoil this story for you.

This murder mystery is not the typical ones we generally find in the books of Agatha Christie. While there are murders and enough red herrings, this book is more like a thriller. There is romance, secret society, nefarious plan and international espionage. There are also people wearing masks. Overall, the book is full of action and keeps the readers engaged and guessing all the time. Interestingly, there is enough humour to bring smile on readers’ faces time to time. The ending of the book surprises you.

The presence of too many characters can complicate things. This complication becomes worse when the names of characters are very similar to each other. And, the situation becomes worst when the characters are referred by their first name at some places and by their last names at some other places. Yes, this is what you find in the beginning of this novel and it becomes really difficult for you to remember who is who. At the same time, some of the characters have been drawn really well in this novel. For example, the characters of Superintendent Battle and Lady Eileen Brent. Though Battle is not as popular as Poirot or Miss Marple among Christie fans, his character impresses you and does all right in this book. However, it is the character of Lady Eileen Brent which not only leaves a long lasting impression but also delights you.

In the end, I would rate this book as worth spending time with. Yes, this is not a brilliant book but certainly an enjoyable ride.

This book review is a part of ‘Agatha Christie Reading Challenge‘ 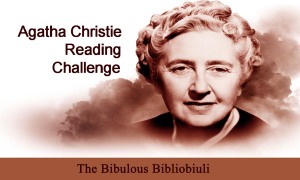 The Art of Blogging
The Book Genie PR