‘From Where I See’ by Ajay Yadav is definitely a book with a difference. In the backdrop of a murder mystery, the author has tried to deal with various issues of the society. Choosing religion as a theme is a bold stroke of genius and the author should be complemented for that. Writing a book on religion can certainly be intimidating. However, author’s vast knowledge of world religions, his immense erudition, his ability to handle various myths and symbols with ease, his lyrical and descriptive talent, and his experimentation with form and style together give him enough room and scope to express himself fully and satisfactorily in this book. The discussion on religion in this book ranges from its origin to its present state. The author has tried to bring out the real essence of all religions. And, the author, in a way, has accomplished this task. This achievement becomes more important as religion is notoriously difficult to define. 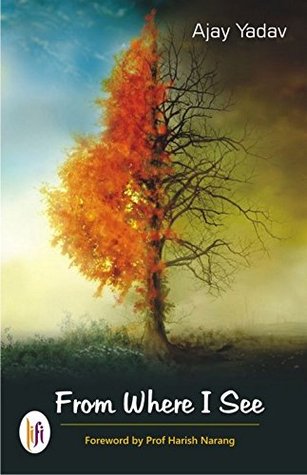 People proudly claim themselves as religious. But if you ask them some questions about the same, they will admit their lack of knowledge. Some people will even not admit their ignorance. Another way of putting it is that people with a highly religious nature are less likely to know about the true character of the religion. This ignorance and credulity foster a lush crop of superstitions. For example, a plague epidemic becomes a terrible goddess from whose clutches there is no escape. Additionally, many politicians and self-proclaimed Babas take benefit of this ignorance and use it to their own benefits. The author beautifully presents this other dark side of religion. As the title of the book suggests, this book offers a different view of so-called reality. The book directs the reader to go beyond what the eye and mind see in the reality.

While the book amazes as well as impresses you with an open-minded analytical approach adopted by the author, the book fails on certain fronts. The main plot (the murder mystery) somehow gets lost in the flood of information. And, the book reads more like a non-fiction than a fiction. Most of the time, what you read is deliberations on different topics between different characters in the book. In fact, more than 90 percent book is filled with such discussions. Some of the discussions become preachy in nature, and, here, as a reader I feel disconnected with the book. Both cutting down the monologues and removing some unnecessary details could have made these discussions more interesting to read. Discussions can certainly be vivid without being lengthy. The climax of the book also disappoints you. It seems to be done in a hurried manner. In fact, the whole storyline, according to me, could have been dealt in a different way.

Read this book if you have the following questions in mind. What is the true definition of religion? What is religion all about? What are those common elements that link all religions? This book will certainly help you to find out not only answers of these questions, but a number of other queries related to religion also. In fact, this book will force you to think about religion seriously and prompt you to ask more questions about the very nature of religion itself. However, you always need to keep your thinking cap on. While you might agree with some of the points made by the author, you might also disagree with some. This is what happened with me. While I completely agree with some of the points raised by the author, I do have my reservations against some of them.

Everybody should read this book once as the book helps you to brood over some of the critical issues of your life.

Note: I received a free copy of this book in exchange of an honest review.