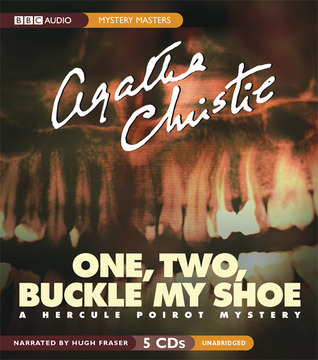 Twenty one, twenty two, three stars will do…..!

This is another Christie mystery that features Hercule Poirot (the well-known sleuth of Agatha). While the book starts off with good promise, the reader feels a little let down at the end. The story begins with the death of Poirot’s own dentist. While this appears to be a suicide to everybody, Poirot thinks otherwise and sets out to find the murderer. Then there develops a mystery and readers witness a lot of twists and turns. There are also shoe buckles, quality stockings, bigamy, impersonations, sealed chests containing another dead body, missing persons and random gun shots. And finally the murderer is revealed at the end. However, there is something missing and I, a big fan of Christie, got disappointed. I felt a similar feeling while reading ‘Why didn’t they ask Evans’.

Sometimes, I feel that I rate Christie’ novels below par consciously. I should have given this book four stars. In fact, this is a well-written British mystery that any of Agatha Christie’s fans will enjoy. It was not a bad reading at all and even I thoroughly enjoyed reading it. Most probably, my expectations from Agatha Christie’s novels are more compared to other mystery novels. While there is no disrespect to Poirot’s grey cells, I found Poirot’s deduction a bit too grey in this novel. A lot of things remained unexplained and sometimes things move too fast to digest in this novel. I probably want everything to be perfect in any Christie novel and even a single weakness forces me to give a lower ranking. However, this is my observation and other Christie fans may have a different point of view.